Recession Named The Reason For Worldwide Slump In Shark Attacks!


A recent report from the International Shark Attack File at the University of Florida cited the recession as the reason for a decline in shark attacks last year.

“Shark attacks worldwide in 2008 dipped to their lowest level in five years, a sign that Americans may be forgoing vacation trips to the beach,” the report said.

It’s either that, or sharks have hunkered in the depths to weather the recession themselves. But people who are way smarter than me, namely George Burgess, an ichthyologist and director of the International Shark Attack File, thinks the drop in shark attack numbers is directly related to the economic downturn.

“I can’t help but think that contributing to that reduction may have been the reticence of some people to take holidays and go to the beach for economic reasons,” Burgess said. “We noticed similar declines during the recession that followed the events of 2001, despite the fact that human populations continued to rise.”

This may be so. After all, his logic is sound and his use of words such as reticence makes me want to believe him. But so far, the outlook for 2009 doesn’t look as rosy. Especially after numerous shark attacks on surfers around the world, including two fatal attacks in South Africa and an alarming number of incidents in Australia.

Couple this with the fact that the recession itself is freeing up a lot of time for people to go surfing when they would normally be working, it seems that this theory might not hold up in the long run. 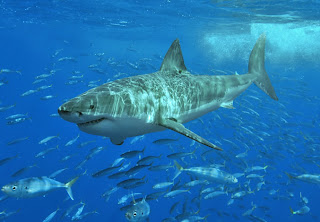 0 thoughts on “Recession Named The Reason For Worldwide Slump In Shark Attacks!”