Its Thursday morning, I leave Gloucester at 11am and by 4pm before unpacking or checking into the hotel, I was standing outside Errant Surf School in my wetsuit ready to go.
The waves were good, there were a few sets coming in, some nice sized green waves which were breaking right where we were & a few sets of big ones which were breaking further out, so with those ones we would just Eskimo roll under them & wait for the smaller ones to come through.
The one thing about surfing green waves that freaks me out is the “drop” you get where you are at the top, just as the wave breaks. I normally find that if I see the drop I’ll just chicken out, where as if I don’t look at the drop I find that I enjoy it. BUT at the same time I obviously need to look where I’m going, so that’s something I need to work at!
That surf was good fun, and I nice introduction to the sea again (as it’s been 5 months since the last surf). On the Friday we headed out in the morning. The waves were yet again really good, however overnight I had somehow lost the ability to do a pop up. After 45 minutes & getting more & more frustrated. I picked up my board, stormed off onto the beach & collapsed on the sand. Getting more agitated that I can’t pop up properly I thought to myself that stressing out isn’t helping the situation, so went for lunch and a walk round town. 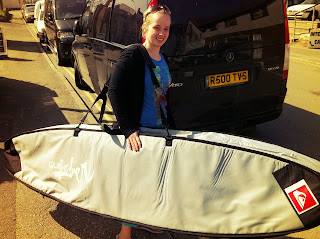 On my return I was determined to not let this morning’s attempt put a downer on the afternoon surf. I had PMA, I was chilled out, I had a fully stomach (but obviously let it digest a bit first!) and I was ready to get this show on the road.
The waves this afternoon seemed a lot more peaceful than the morning, they were actually perfect. Curling nicely at the top, glistening in the sun, a beautiful blue & they seemed to be going in slow motion.
After a few white water rides I was checking out an approaching wave, I thought to myself “This is the one” I paddled as quick as I could to get to the same speed as the wave, it picked me up, it was a perfect positioning, im getting ready stand. But I see the drop…and bail. Yet again it was mind over matter & the mind won. I turned back and began to paddle out. A few waves later I see another one approaching, I paddle to get my speed up. I then remembered something I was told on an Improver weekend with Errant. The words I had to remember when surfing: 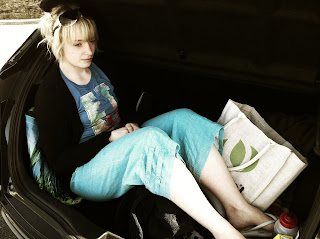 So as I was paddling I “Looked” the waves was approaching almost in slow motion, it looked perfect. However I couldn’t catch it, It didn’t look like it was going to break in time, as I was about to back off I had this “paddle, paddle, paddle” pop up in my head. So I did. I paddled as fast as could and I caught up with it, all of a sudden I felt the wave begin to lift up the back of my board, I remembered my Two more stroked and popped up. As I stood up, it was the most amazing feeling, there was no dreaded drop. Instead, there was this perfect, smooth glide down the front of the wave – That was it, that was the feeling I had in Spain, I’d got it back!
Once I felt it, I wanted it again, so I paddled out. Successfully doing this on about 7 consecutive waves, I realised I knew exactly what I needed to do. All that information surf coaches have been telling me for a year or so all popped into place like a puzzle and I felt the biggest feeling of self-achievement and joy.
All I need to do now is bottom turn, cutback, foam climb, barrel ride and the list goes on.
For now Im though I’m happy enough knowing I’ve broken one barrier, the rest will come in good time and practice.